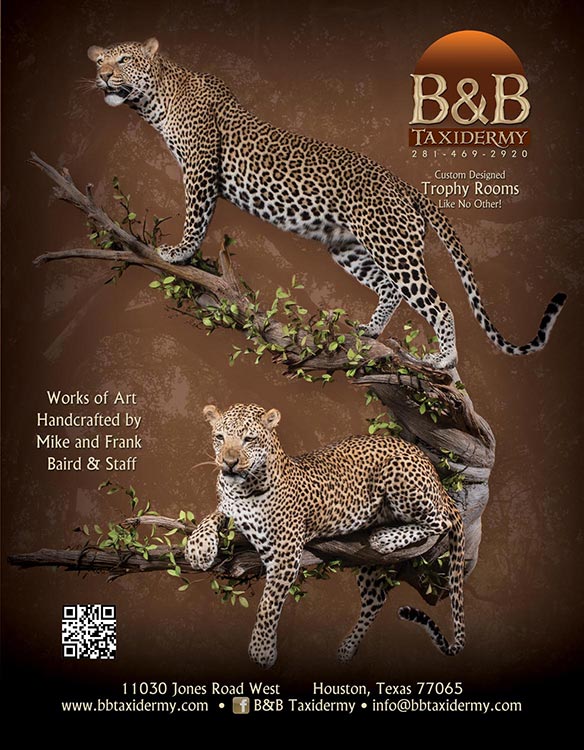 For decades, hunters and fishermen have been preserving their trophies through taxidermy. Besides photographs, taxidermy is the only other way to sustain the memory of your favorite hunts. It is the best way to preserve your achievements and to remember all the laughs and struggles that happened during the hunt.

Taxidermy by B&B Taxidermy in Houston Texas uses the art of preparing, stuffing and mounting the skins of animals with a realistic and lifelike effect. B&B Taxidermy offers many options for mounting your trophies no matter if it’s African, North American, Global or Exotic.

You may know the basics behind taxidermy, but we bet you didn’t know some of these fun facts:

Where it all began: One of the first documented taxidermy animals was one of Captain James Cook in 1771, which was a kangaroo skin that he brought to London. The art of taxidermy got increasingly popular in the 19th century in England. There was an increased demand for leather which meant an increase of tanning. Tanning is the process of turning animal hides into leather, this practice made the the art of taxidermy possible. Taxidermy has come a long way since 1983 when Mike Baird opened B&B Taxidermy in Houston Texas.

Sawdust & Rags: The first taxidermy mounts were stuffed with rags and sawdust which made it increasingly difficult to get the anatomy correct, leaving the mount often disfigured. Today, taxidermist are able to purchase a mannequin which they can then sculpt to achieve the look and position they want, then stretch the skin over it. It can be difficult to find a skilled taxidermist who can create a truly life-like appearance for your trophies. Fortunately, there’s B&B Taxidermy in Houston Texas.

The first Platypus: While working in Australia in 1798, Captain John Hunter sent the first pelt and sketch of a Platypus back to England. When it arrived, nobody knew what it was and just thought it was a joke. After that, "hoax taxidermy" took off and taxidermists enjoyed the art of creating “new animals” by using parts of other animals. Some of the most popular "hoax taxidermy" animals are Jackalopes and Chupacabra.

Preservation: In early taxidermy, the most common type of preservation was arsenic. However, each taxidermist had their own secret formula of chemicals that they used. Taxidermist held these secrets close and would often go to the grave with those secrets never being told. Today, things are done much differently and much safer. B&B Taxidermy is a USDA regulated facility and everything they use to preserve your mount is completely safe for you and your family to keep in your home.

Competitions: The very first taxidermy competition took place in 1880. William Hornaday’s “A fight in the tree tops” won the top prize. The scene showed two male Bornean orangutans fighting over a female. This indefinitely changed the art of taxidermy and influenced taxidermists to improve their skill and accuracy in their mounts.

Specimen v. Trophy: You may hear both of these words used often in the taxidermy world. But did you know that they refer to two different things? A specimen refers to an exact replica of the animal in the wild; a trophy refers to a head or shoulder mount of the animal, which is mounted on the wall.

If you’d like to learn more about taxidermy in Houston and all of Texas and Louisiana, contact B&B Taxidermy today. We specialize in North American and African mounts. Whether you’re looking for a high-quality mount for a grizzly bear, deer, or safari kill, you can count on us to preserve your memory with high-quality taxidermy services that will give your a lifetime of great memories.